Leading lifestyle publication Robb Report spotlights how the Galaxy Z Fold2 helps entrepreneur Adam Braun in his day-to-day life – and how it inspires him to pass the favor forward this holiday season.

The Samsung Galaxy Z Fold2 helps purpose-driven entrepreneur Adam Braun make the most of the season.

From his snow-covered perch on Utah’s Powder Mountain, Adam Braun is preparing for a holiday like no other. The 37-year-old entrepreneur, with his wife, Tehillah Braun, and their 4-year-old twins, Bayla and Dylan, have decamped to the Beehive State to enjoy a season immersed in nature, far from their home in Westchester County, north of New York City. 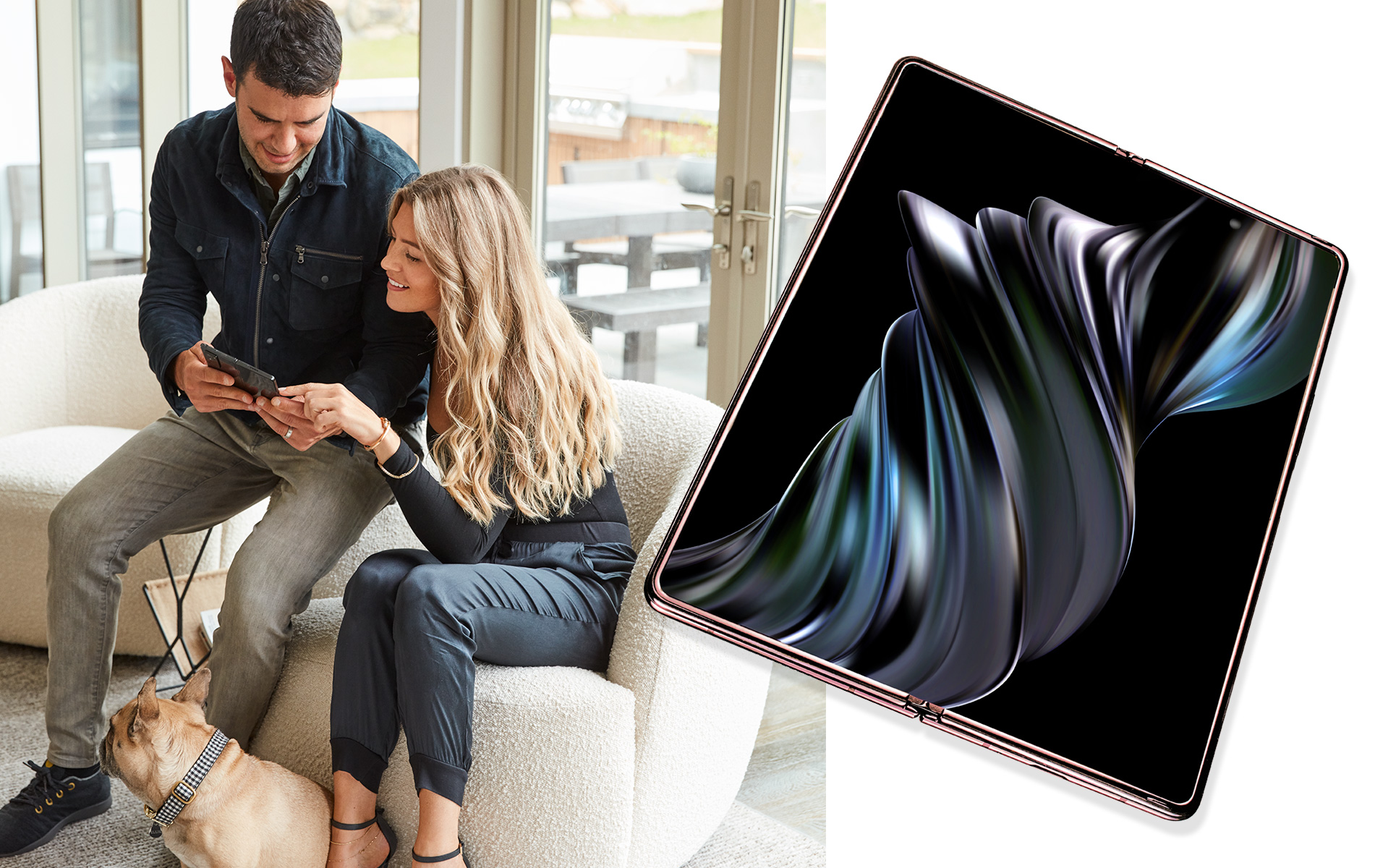 Like so many of us in this work-from-home era, Braun is trying hard to conclude this complicated year on a positive professional note. In 2008, he founded Pencils of Promise, a purpose-driven organization that builds schools in the developing world. He now serves as an emeritus board member for PoP, a role that involves reaching out to business leaders to generate fruitful relationships for the organization. He also acts as a formal advisor to fellow entrepreneurs, including the founders of Backdrop, a direct-to-consumer company aiming to disrupt the paint industry, and Planetary Hydrogen, a climate-change startup.

Braun’s biggest professional priority, however, is the startup he’s building to address climate change, due to launch in early 2021. “Specifically,” Braun says, “it will enable individuals, companies and institutions to generate significant financial returns while conserving the world’s most important environmental resources.”

Staying connected—to family members on the East and West coasts, to colleagues and collaborators around the world and to friends near and far—is of utmost importance to Braun, which is why, this year, he’s grateful to have the new Galaxy Z Fold2, Samsung’s next-generation smartphone, by his side. 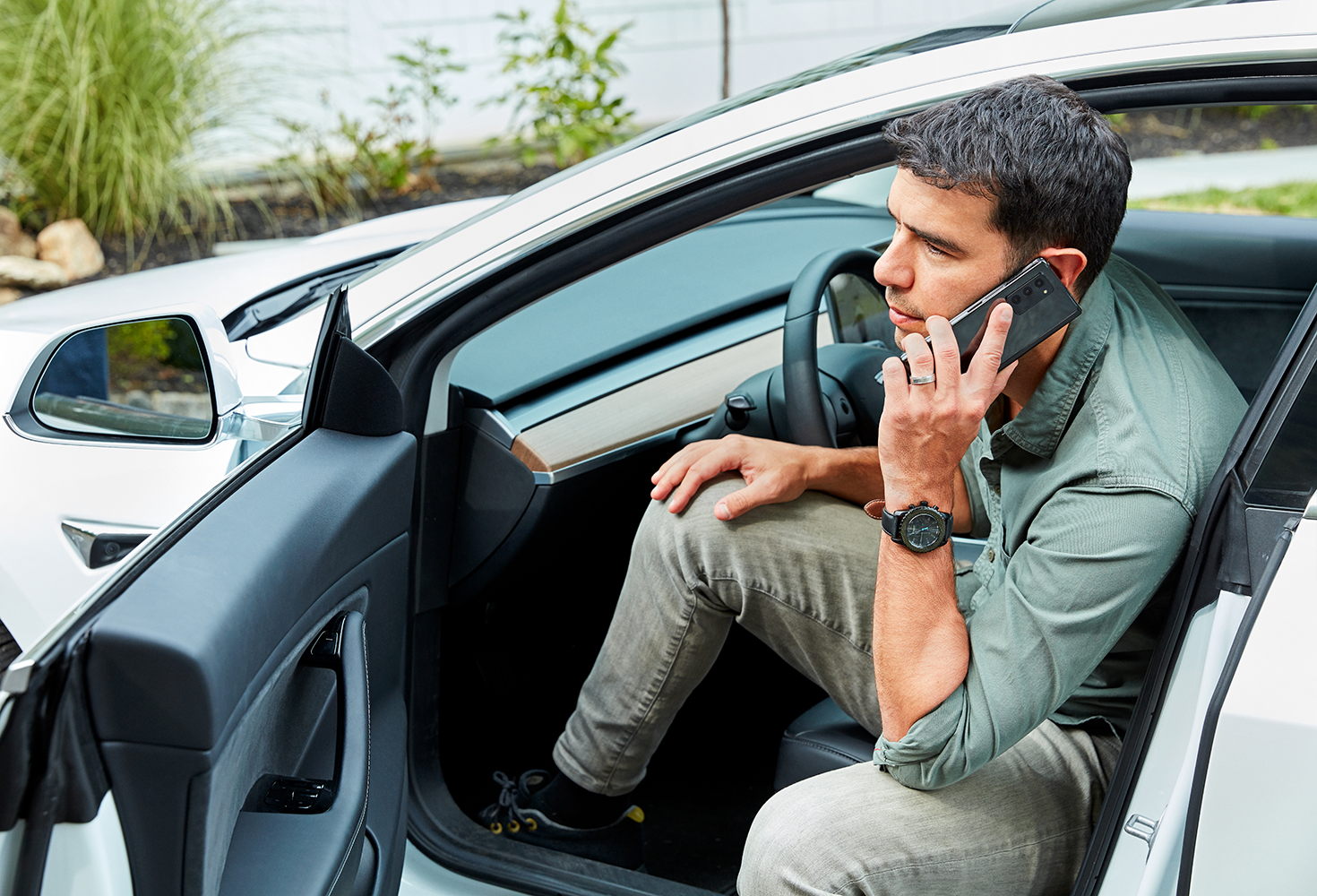 Braun relies on the phone’s foldable technology, which transforms the device from a pocket-size phone with a 6.2-inch Infinity-O Cover Screen into a quasi-tablet with an impressive 7.6-inch Infinity Flex Main Screen. It helps him connect, communicate and create wherever he is, at his home-away-from-home, on the slopes or in a multicontinental video conference call.

Rather than feeling tethered to his Galaxy Z Fold2, Braun, the New York Times bestselling author of The Promise of a Pencil: How an Ordinary Person Can Create Extraordinary Change, says its unique design and functionality allow him to feel the kind of freedom people don’t typically associate with devices.

“The Z Fold2 is an incredible enabler,” he says. “Historically, I’ve been tied to a computer and a desk inside my home to get work done. With this device, I can drive to somewhere really beautiful, have a video chat from that location, and as soon as I’m done, close the device, put it into a mode where I’m streaming music, go on a hike, and know that I’m still accessible. It enables me to have experiences I would not otherwise have had.”

The professional benefits of owning the Galaxy Z Fold2, which boasts a game-changing Multi-Active Window feature that gives users the ability to move seamlessly between as many as three apps, are impossible to deny. “The power of a phone like this allows me to have an entire office in my pocket,” says Braun. “In my home office, I have a dual screen setup that includes a laptop and a monitor. The fact that I can now do a Zoom call and have an open document below it to take notes is the equivalent of having dual monitors. There are plenty of studies that show the increase in efficiency with two monitors. I love it. And now that I can have, essentially, a dual monitor setup on my mobile represents a significant boost in productivity.” 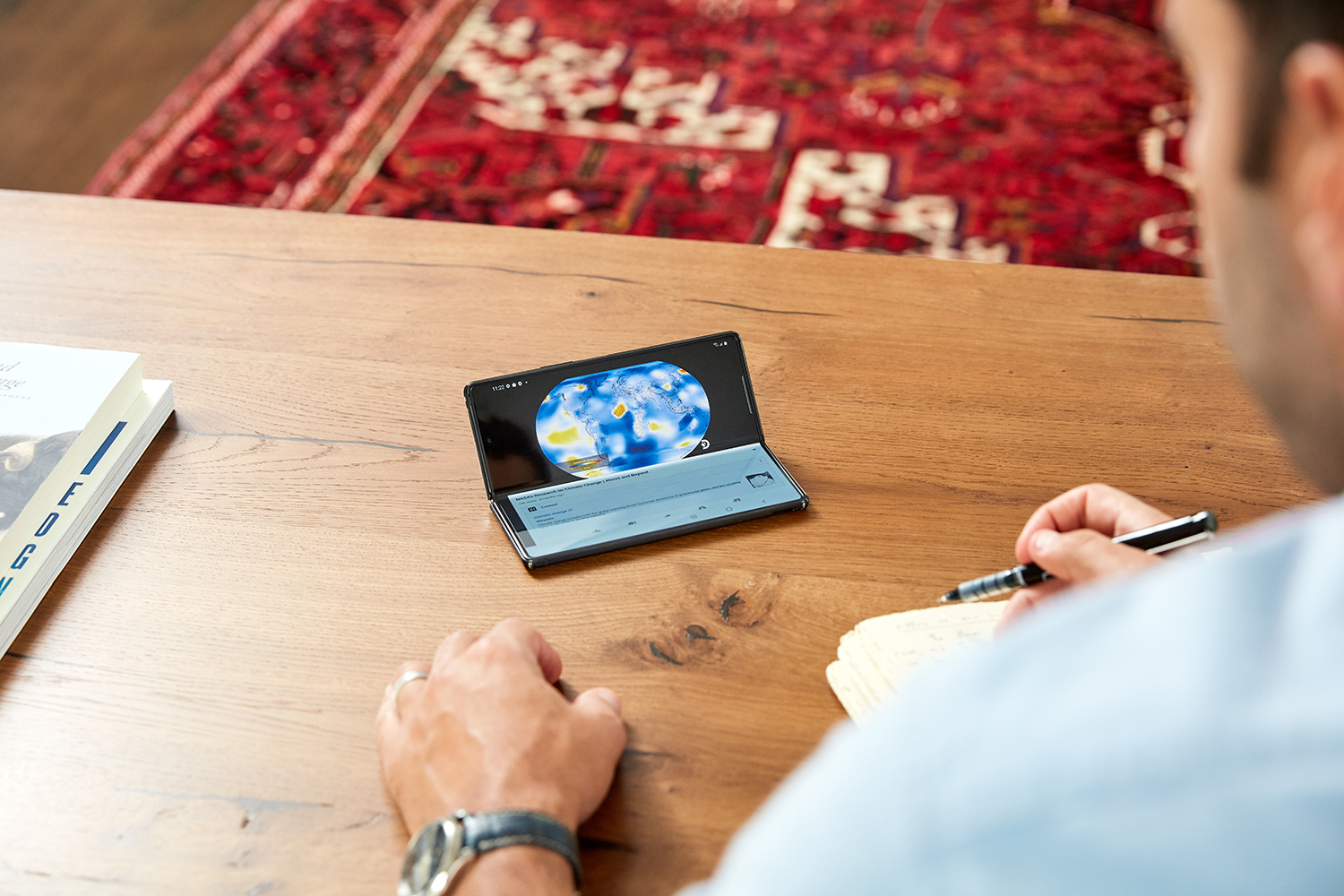 For Braun, however, the phone’s human-centric features are even more compelling. From the start of his day, the Galaxy Z Fold2 is his digital companion, guiding him through a mindfulness meditation. At breakfast, he places the phone in Flex mode, so his kids can video chat with their grandparents before he walks them to their nearby preschool. In the mid-morning, he uses the phone to catch up with colleagues as well as do research, “whether that’s digging into different sites, reading PDFs or white papers or, obviously, emailing.”

In the afternoon, Braun sneaks in a workout (“I mountain bike a lot and I use an app called AllTrails—I love the ability to track my ride while also having my phone be my speaker system.”) Once the kids are home, Tehillah may borrow the Galaxy Z Fold2 to look up recipes for an elaborate evening meal. Come nighttime, however, Braun is back on the device, watching tutorials on how to brew his own beer, a passion that’s only intensified during this year of quarantine.

On weekends, Braun takes advantage of the Galaxy Z Fold2’s advanced camera technology to up his photography game. “Recently, my wife and I went out of town and when I wanted to take a photo of an expansive landscape, the phone’s auto setting turned on,” he says. “The fact that the camera recognized the context and adapted the lens made the photos better than I had ever been able to take on a phone.” 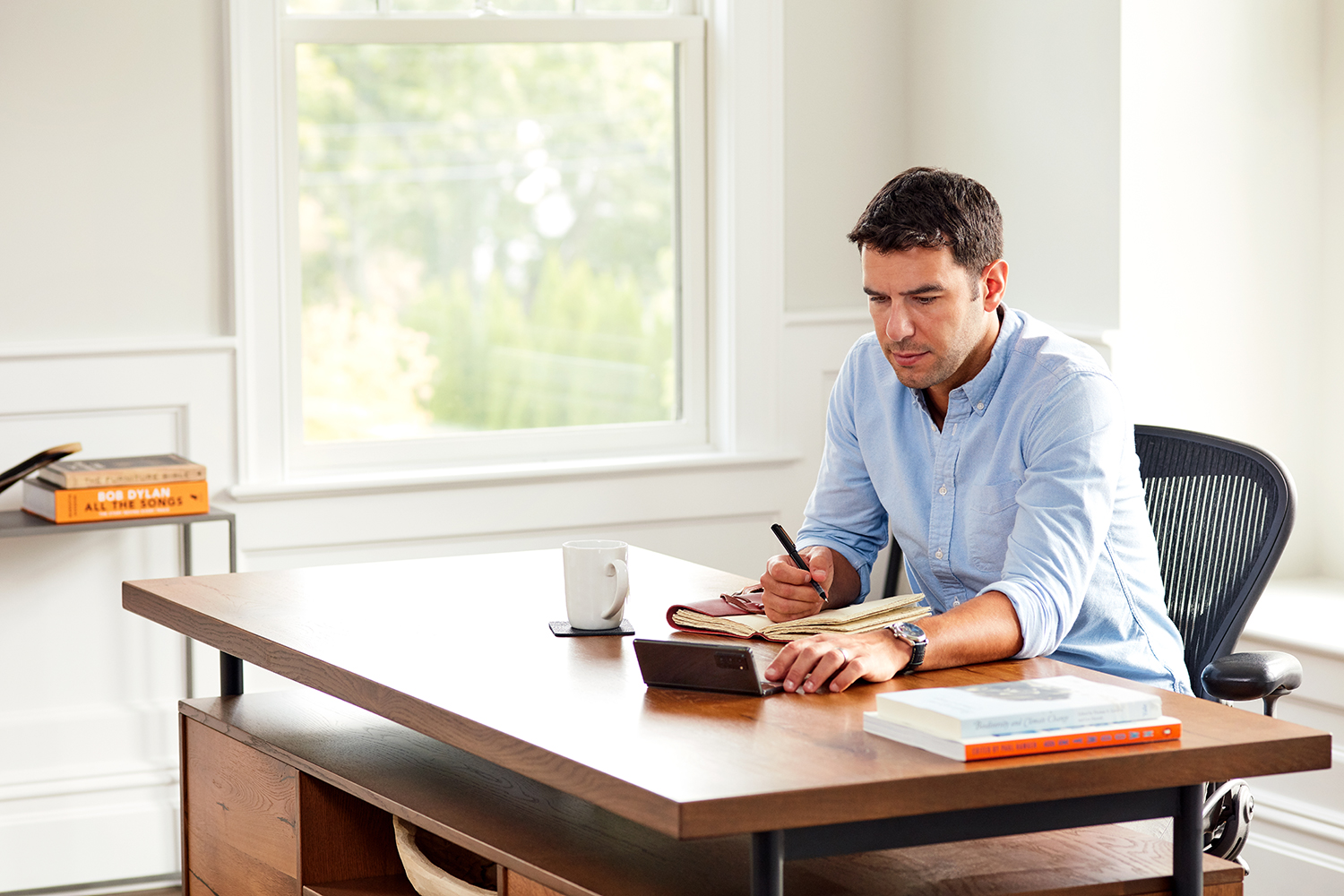 When the time is right to start traveling again in earnest, Braun is looking forward to having the Galaxy Z Fold2 accompany him on flights. “It’s your fully functional phone, your digital book, your movie viewer,” he says. “I read books on tablets and in physical form, but this is the first time I actually want to read a book on my phone because the double-wide screen makes reading text so much easier.”

There’s no question that Braun leads a full, purpose-driven life founded on his love for community and IRL connections. That the Galaxy Z Fold2 enhances and enriches his day-to-day is a reflection of how thoroughly Samsung has thought through our changing relationship with technology. By innovating the smartphone’s form factor, the company has paved the way for a future in which on-the-go luxury consumers like Braun feel in control of their devices rather than controlled by them. Now that's a gift we could all stand behind. 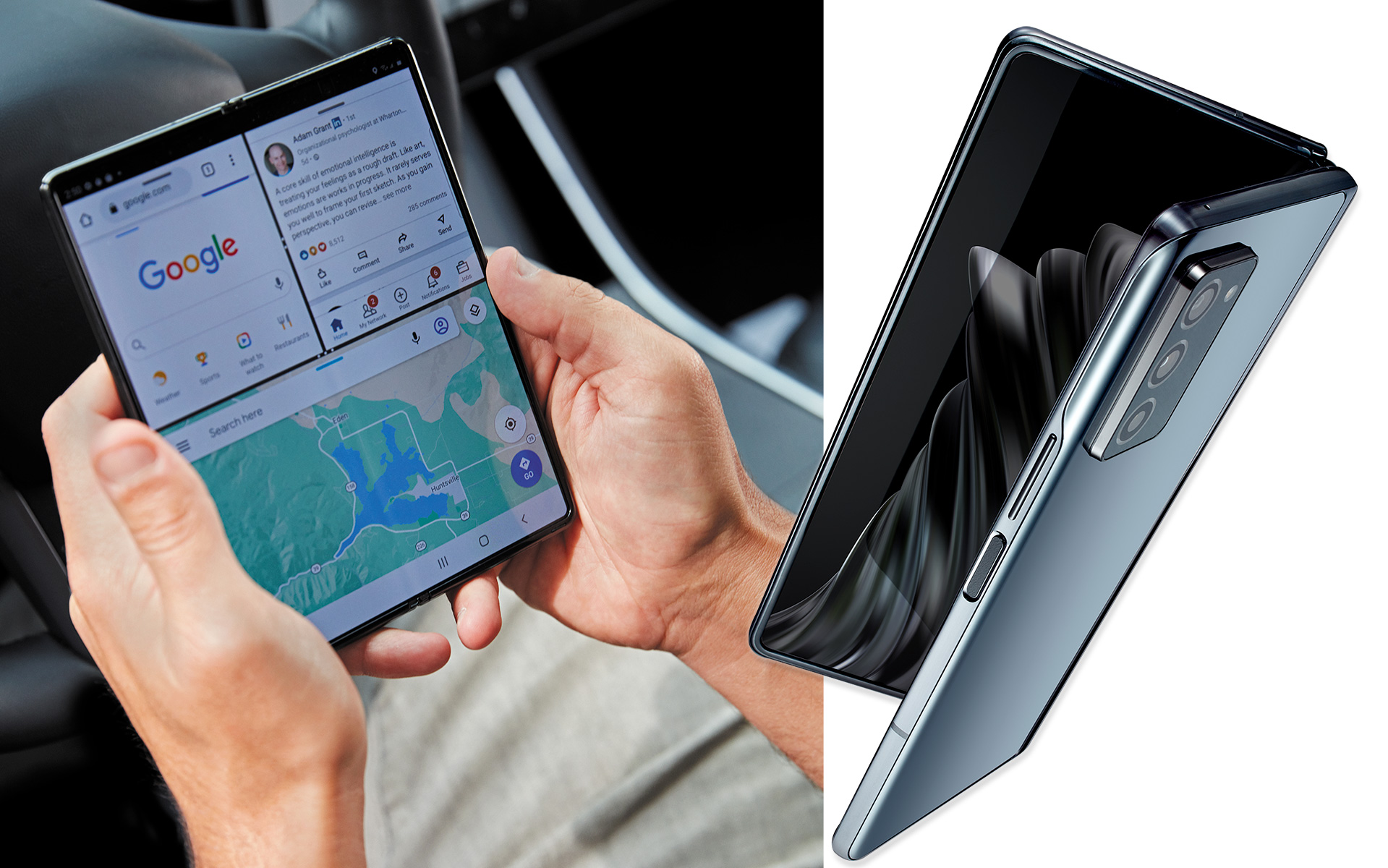 When Adam Braun was growing up, his parents instilled in him the idea that giving is more important than receiving, especially around the holidays. So, it’s only natural that he is eyeing the new Galaxy Z Fold2 as a deluxe gift for some of his favorite people.

Braun’s wife, Tehillah, is an interior designer for whom the Z Fold2’s ample screen real estate would be a saving grace. “She’s doing everything from looking at renderings to building out vision boards,” says Braun. “The wide screen functionality would be really exceptional for her.” The device’s high-resolution 7.6-inch foldable screen is built for anyone working virtually. Bonus for Tehillah: Whether she’s scrutinizing different pieces of furniture, zooming in on details of renderings or creating Pinterest boards for discerning clients, she can manage all of that at the same time, thanks to the device’s groundbreaking Multi-Active Window feature.

When Braun received the new Z Fold2, the first person he called was his father, Ervin Braun. “He always loves the newest gear and technology, so I knew he’d freak out when he saw the phone,” Braun says. His father is also an avid sportsman (kitesurfing and wakeboarding, in particular), who’s constantly on the go. “Having a phone like this that not only enables him to video chat with his grandkids, but has the Flex mode feature so he can set it down and treat it like a tablet is great,” Braun says, “because he’s constantly watching YouTube videos and tutorials on different sports and gear.”

“My best friend is a videographer,” says Braun. With the Z Fold2, anyone who makes a living behind the lens has five cameras to play with, including features such as Pro Video mode, Single Take, Bright Night, Night Mode and the new Auto framing feature, all of which improve the technical aspects of a shot, allowing the cinematographer to focus on capturing the perfect aesthetic details. “He would absolutely fall in love with the ability to both shoot and use editing functionality on the phone to make short films or video content,” Braun says.

*This article was originally published on Robb Report. 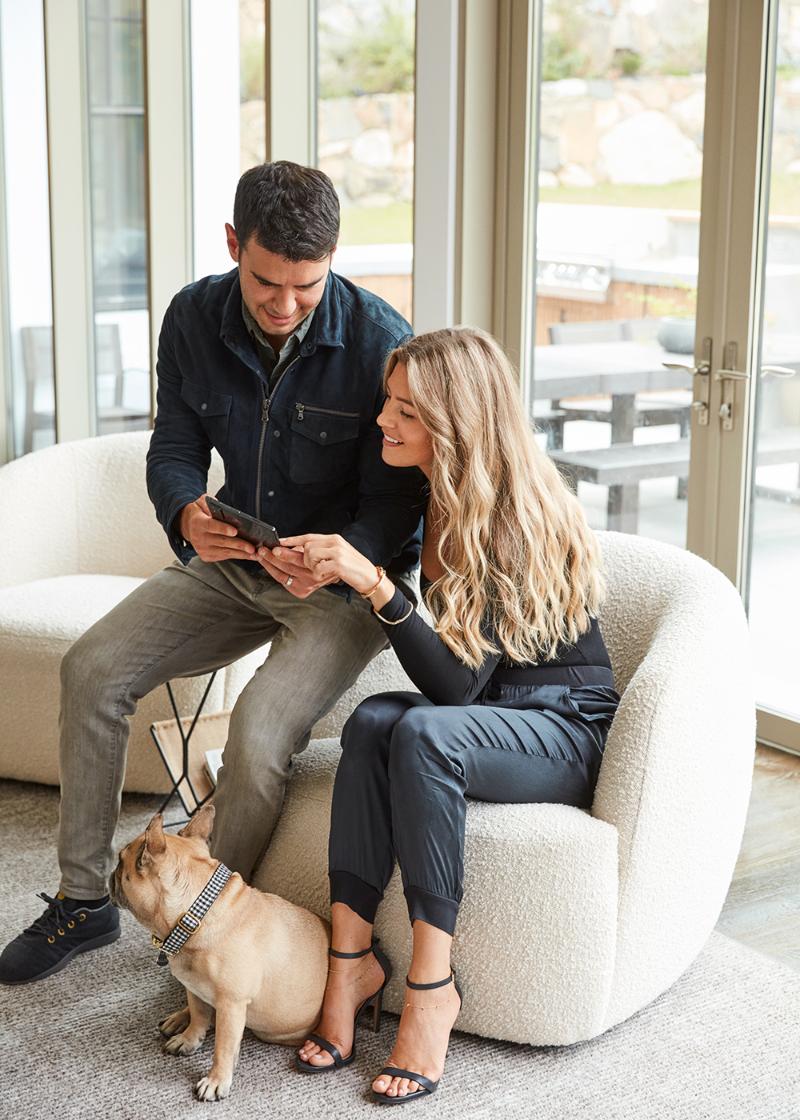 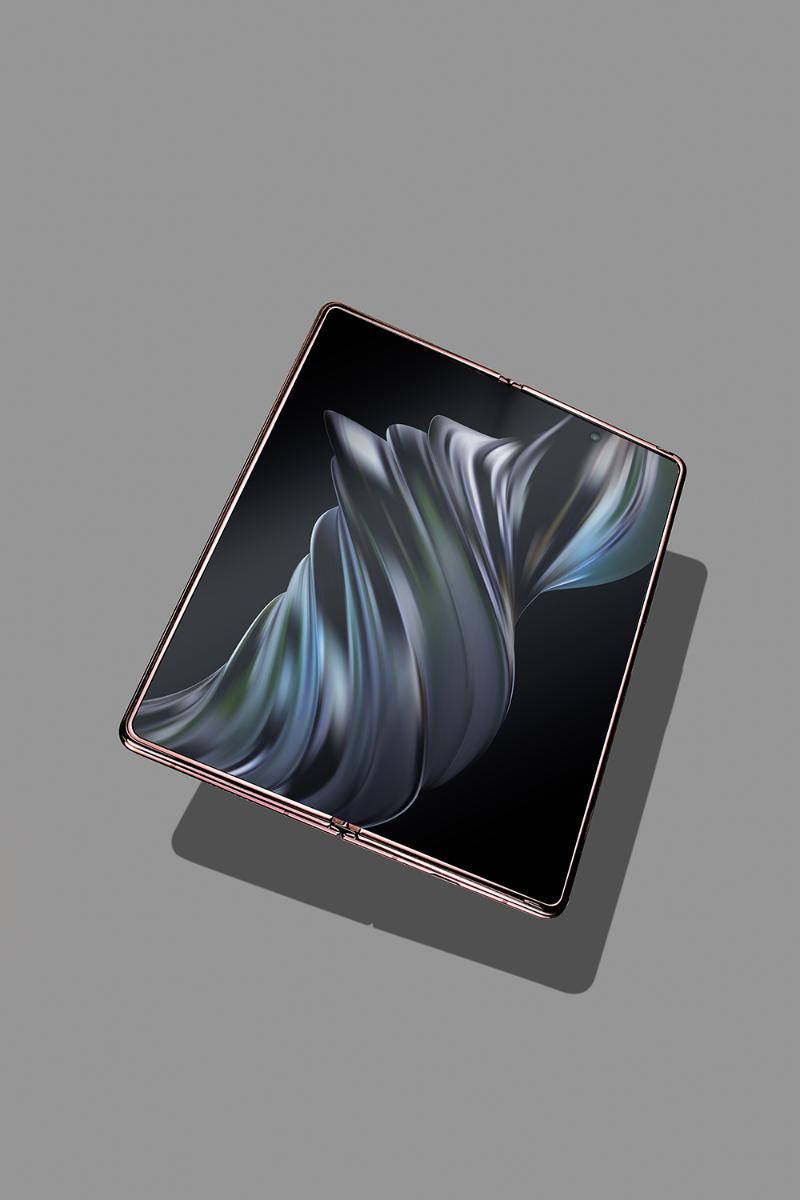 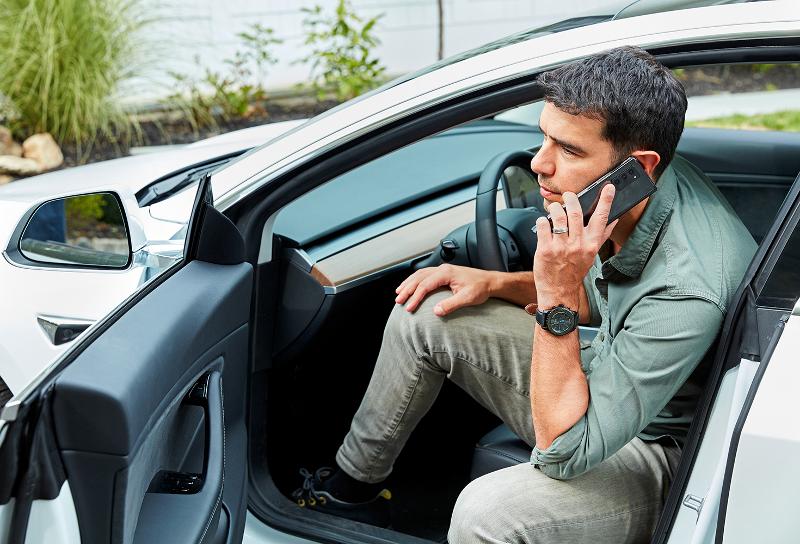 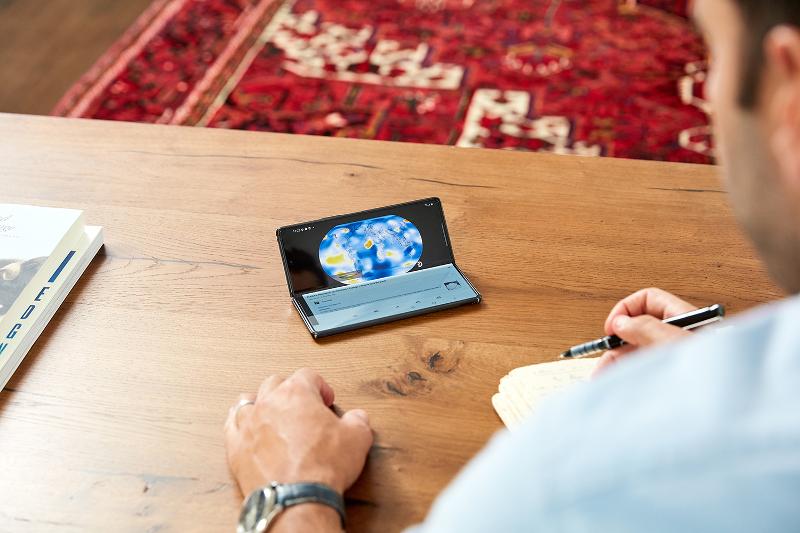 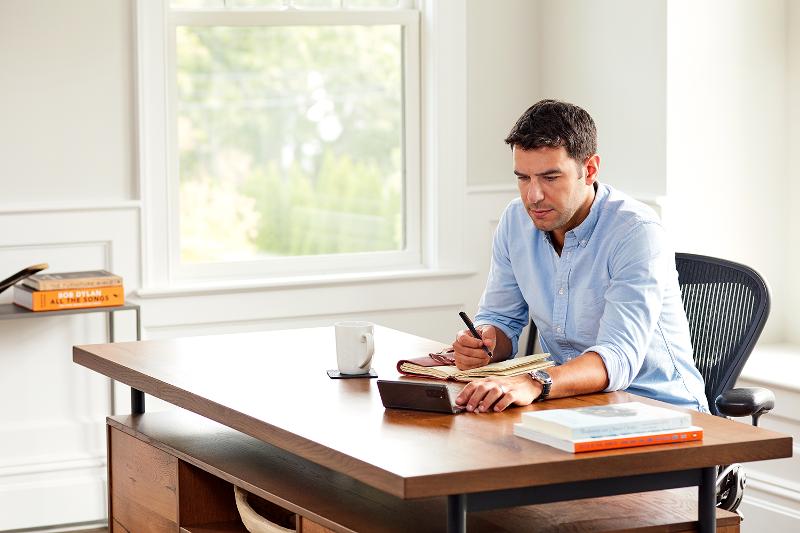 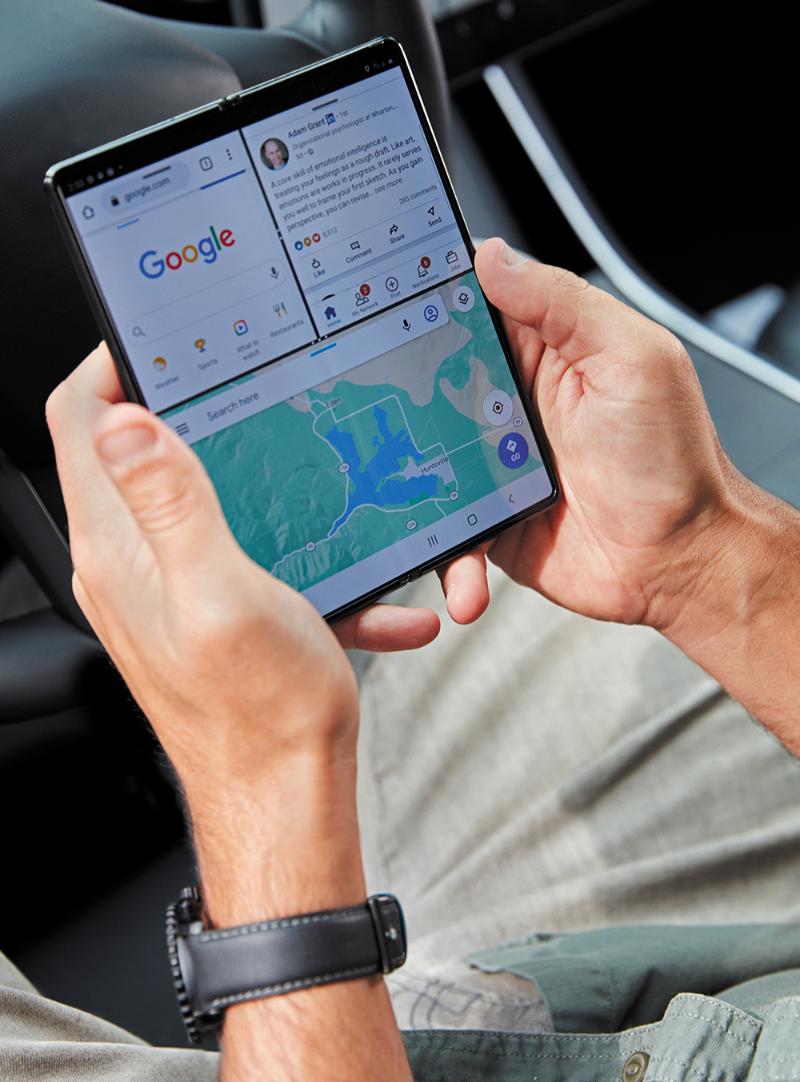 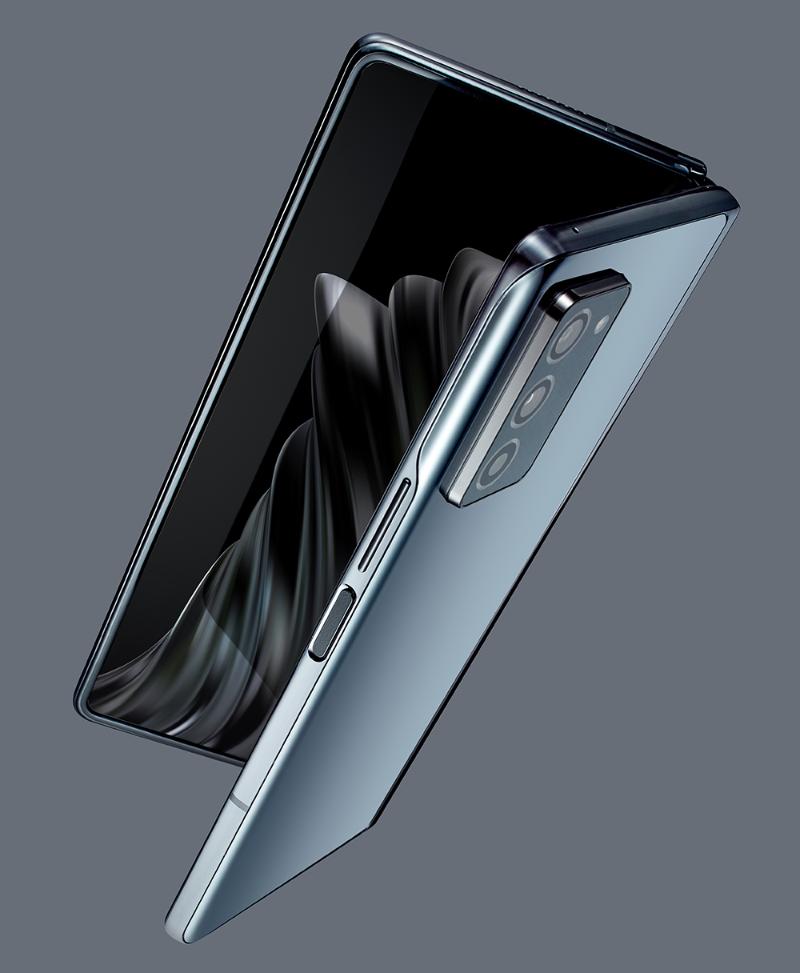