[Editorial] Setting a New Standard for Smartphones in Our Changing World

TM Roh reflects on Samsung’s history of making the impossible happen, by breaking the rules of smartphone design to produce innovations that shape the world.

When I look around me, I’m astounded by how much innovation exists in our world today. Yet I am most excited about the evolution of the smartphone. This single device gave way to new digital industries – to remote work, schooling, entertainment and fitness – and the ability to capture, explore and communicate with anyone, anywhere with the touch of a finger.

The smartphone is a portal to infinite progress. And at Samsung, we have never taken that for granted.

It’s not enough for mobile innovation to just evolve with the world. We have to be a step ahead, so our technology can help transform the way we experience everything around us and make our lives easier. That’s why we constantly push ourselves to break the rules of what a smartphone can do.

Breaking the Rules to Start the Next Chapter in Smartphone History

In 2011, the Galaxy Note merged the convenience and portability of smartphones with the expansive screen and notepad-like functionality of tablets. Some balked at the 5.3-inch display — considered enormous then — but Note created a legacy where a large display is now the standard. The S Pen also surprised everyone. It empowered people to bridge creativity with productivity – whenever inspiration struck, they could quickly write down their ideas and thoughts in Samsung Notes.

In 2019, we dared to redefine smartphones once again. We launched our Galaxy Z Fold Series and brought an entirely new form factor to the mobile industry. Our cutting-edge foldable design changed how people used their phones. With Flex Mode, video calls are hands-free and easier. And multitasking with multiple windows are also a breeze, as your phone becomes tablet-sized in the blink of an eye. And once again, the industry took notice, with many mobile companies now following in our footsteps to make foldables the next big thing.

Innovating by Listening to Consumers and Taking Note

In a sea of smartphone sameness and iterative updates, our ambition remains firm: to detect the signals that transformation is stirring – by listening to your feedback – and continue to deliver mobile experiences that empower us all to evolve.

We know many of you were surprised when Samsung didn’t release a new Galaxy Note last year. You loved the unparalleled creativity and efficiency of the Galaxy Note series, which enabled you to switch from gaming nirvana to high-octane productivity in the blink of an eye. You raved about the lifelike S Pen, which many say rivals putting ink to paper. And we haven’t forgotten about these experiences you love.

Catalyzing the Next Evolution of Galaxy

For years, Samsung has converted the skeptics who thought our ideas were impossible. Whether it’s a screen that’s too big, a stylus no one knew they needed or a pro-grade camera that could truly bring mobile photography out of the dark.

With every fresh evolution of Samsung Galaxy devices, we have introduced features that redefine the entire mobile category. And we’re about to rewrite the rules of industry once again.

At Unpacked in February 2022, we’ll introduce you to the most noteworthy S series device we’ve ever created. The next generation of Galaxy S is here, bringing together the greatest experiences of our Samsung Galaxy into one ultimate device.

With it, you will own the night – taking the best and brightest photos and videos you’ve ever captured with a phone. You will also dominate the day with power, speed and tools that can’t be found elsewhere. You will enjoy cutting edge-innovations made possible thanks to the smartest Galaxy experience yet. All while feeling good about being part of the most sustainable Galaxy ecosystem. And, yes, you will help Samsung rewrite the future of smartphones once again.

Get ready for the ultimate Ultra experience. 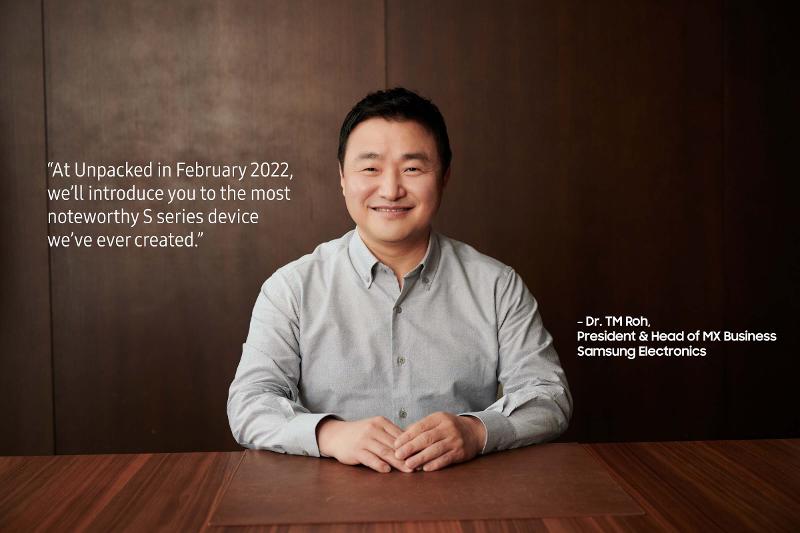